- from the kayak
Happiness can hardly be described in words. A bubbling joyful experience that never ends. Life's living seals only a few meters from the kayak. Curious individuals, young pussies and older seals who playfully splash in the water and swim under the kayak, some so close that one feels its existence as small vibrations in the kayak's hull. A playful kid who busts with the kayak's sheath (I have no rudder but uses the shade for directional stability) slightly impossible to get in the picture. Photographing backwards when there is strong wind blows turns out to be easier said than done.

Just as the happiness chorus flushes through the body when you see a flock of lions on the savannah, a bear outside the photo hide or a huge moose far into Sarek, the well-wishers do not really want to let go when the seals show up. These are nature experiences at their best, where we as humans are tiny and insignificant compared to nature's fantastic creations. Meetings with wildlife for real.
I almost can't stop smiling. Every time I stop paddling, the distance to the seal's increases. At least above the surface. In the water, on the other hand, I see and hear how the seals swim really close as if they enjoy being close without being seen. Friends who snorkelled with seals before certifying precisely the same. Underwater, the seals are more curious than above the surface of the water. Down there - in their world - man is not a threat. At least not physically. Instead, their curious discovery desire is triggered by our mere existence. As long as the seals only encounter paddlers for a few occasions per season, the curiosity will probably persist.

- on the conditions of the seals

Of course, there is no guarantee to see seals when you are out paddling. The tip is to paddle in the off-season, preferably early in the fall or late summer, preferably on sunny days, when the standing noise in the archipelago is reduced to a minimum. It is hardly any secret that the seals do not like motorboats or watercraft that propel through the archipelago as life-threatening projectiles. On the other hand, the seals are happy to arrive as soon as you turn off the engine and let the boat drift in the water.

Keep in mind that seals do not like to be surprised, but paddle purposefully and gladly talk to each other if you are out several pieces and paddles to minimize the risk that the seals feel threatened. Even if the seals - or seals - disappear as you approach, it won't be long before they are back on the cobs again to sunbathe. So you do not need to be afraid to interfere with the behaviour of the seal, but should of course show consideration and keep the distance (which can certainly be difficult as the seals are often very close).

- in the Baltic Sea

In total, there are three different types of seals in the Baltic Sea; grey seals, knob seals and Vikare. The largest is the grey seals, which can still be up to three meters long and weigh almost 300 kg. The grey seal feeds its young on the ice - or on cobblers and insects - in February or March, and stays there for about three weeks before the kids are left alone until they are big enough to hunt on their own. From the birth of the baby, until the mother moves it, the seal baby increases dramatically in weight. From 10 kg to about 40 kg. The seal seals are considerably smaller than the grey seals and can weigh up to 100 kilograms and become about 170 cm long (male). The seal seals are found mainly on the west coast but are also found in several colonies in the Baltic Sea. The kid is born around midsummer and, on the contrary, the grey seals kid can jump in the water immediately after birth and accompany the mother out hunting. Vikaren: Is Sweden's smallest seal, considerably lower than the seal. The cutters are born in February or March in a cave made by the mother in the ice. On the other hand, if there is no ice, the kids probably drown after birth, and no one knows why the Vikaren does not feed his kids on land when there is ice.

- rent a kayak and canoe here 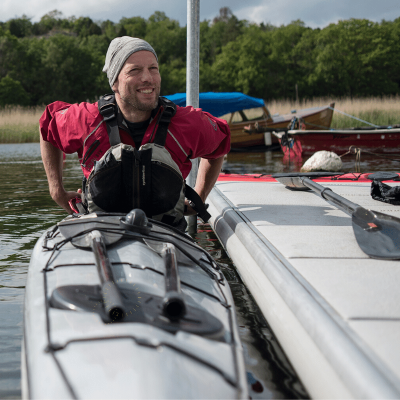