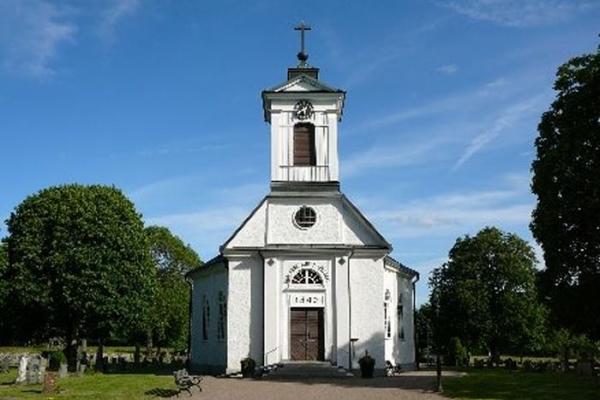 The church has octagonal plan with the vestry to the east and tower to the west. The reef conditioned church is built of horizontal timbers and have round arched windows.

A chapel and a porch was built 1754 in the area. At the beginning of 1800 the population increased and larger spaces in the chapel were needed.

The old chapel was demolished and a new one was finished 1840. The church is made of timber and was also finished in 1840.

Both the exterior and interiors have a neoclassical flavor. The facades were colored red until 1865-66, when the church spirits were trimmed in white with smooth plastered corner and window.

In a restoration 1883-84 added new ceiling, grandstand barrier and altarpiece by Bengt Nordenberg. 1924 was the repainting of the interior of roughly the same color scheme as before.

In a restoration 1938-39 under the direction of architect Å Seberg, was among other things, bench interior more comfortable and the interior repainted.

1957 the church was restored again, this time by architect S Ullén (including repainting).