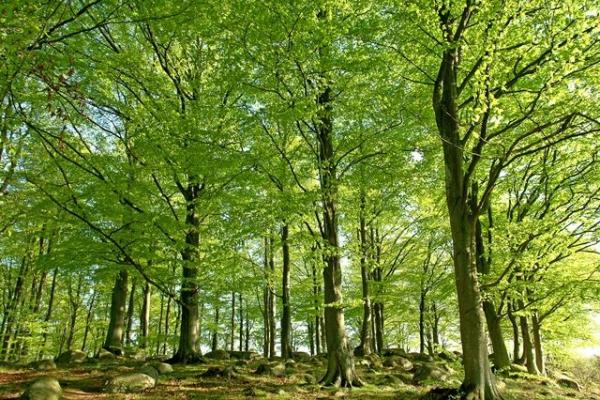 Lister's Head is one of Blekinge's largest nature reserve with an area of ​​about 450 ha.

Lister Head Getabjärområdet has significant natural qualities, mainly geological, biological and ecological values. The geological interest is mostly associated with the well-educated shore levees. These are also of great pedagogical interest since they allow the study of Baltic history of development.

The biological and ecological values ​​are found mainly in the relatively pristine and large connected with hornbeam, beech and oak. Lister Head Getabjärområdet also has a pleasing landscape, heritage values ​​and is also of great importance for outdoor recreation.

The reserve consists of the eastern part of the residual rock Listershuvud - Getabjär. There is a clear drumlinbildning with bare rock in the north and moraine deposited south of it. The mountain is a so-called dome mountains with a maximum height of 84 m. Baltic different stages of development has dedicating beach ridges and strandklapper in till at different levels. The highest sea wall is 54 meters above sea level. On Listershuvuds slope of no less than 29 dykes been identified. The material of the dikes varies from sand to shingle. The lowest-lying sea wall, the so-called Litorinavallen, are well trained and runs along the coast at about 9 m.

The area is very prone weathering and has in some places been eroded so that the overlying moraine collapsed. Deep funnel-shaped holes, doliner, has thus been formed. They are examples of so-called karstvittring. In the northernmost part of the area has caves formed in kritmountain. The cave formation is one of the largest known natural cave systems in Sweden and is of considerable geomorphological value. The vegetation in the area is highly variable. Along the east side of Listershuvud are large contiguous forest, mostly beech and hornbeam.