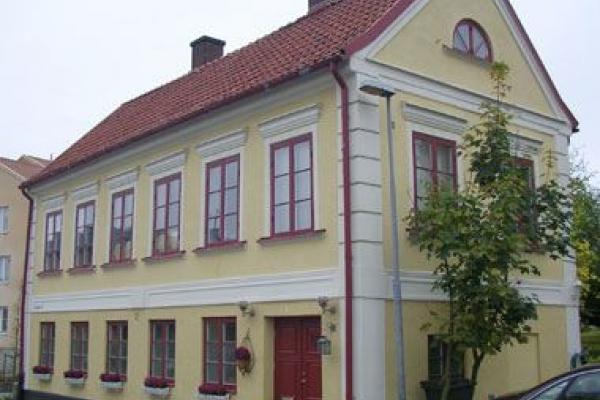 Nicolai house was built originally as a spruthus in the 1830ies. A spruthus was a simple version of a fire station, a house where the water syringes were stored.

The building got another floor in 1857 and the newly established telegraph agency moved in. Fire equipment was moved out of the house in 1867 and two apartments were arranged. The telegraph station was in the house until 1908. The house also served as a parish hall and housed a meat inspection agency. Today is Nicolai gården is a private residence. Nicolai estate forms, along with the parish hall, pastor's office and city hall, a symmetrical square around St Nicholas church. Through its excellent architectural approach and prominent position in the streets, eye-catching, the house is of extremely great value to the cityscape. The building's location in the southeast corner of the block defines and emphasizes the church and cemetery for the city street system, just as the parish hall and the old school, select the other block corners. The building's current appearance, which essentially dates back to 1857, is a good example of neoclassicism ideals with narrow and tall proportions, which gives a light and moderate impact. The house walls are of brick plastered and painted in yellow paint with plaster decorations in white painted stucco. Plaster Ornamentation consists of corner rustic and profiled horizontal bands in the upstairs window extent. Nicolaigården was declared a heritage building in 1967. The house is located within the area of ​​national importance for cultural heritage management: Sölvesborgs city whose urban planning is one of the best preserved examples of late medieval regular square city. St Nicholas Church is the only surviving medieval building in the urban area. Significant traces of medieval settlement were found in particular in the neighborhood where Nicolaigården is located.