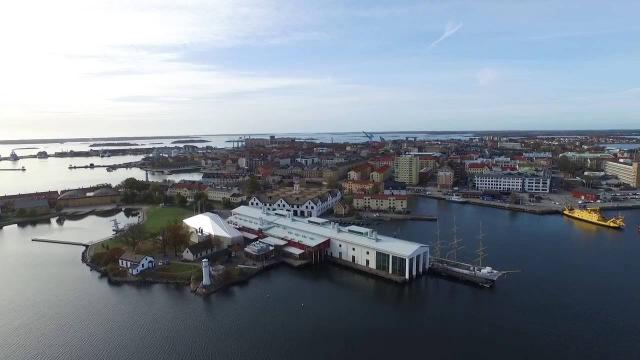 The Naval Museum, which is part of the World Heritage Site of Karlskrona, is located in a beautiful building with exciting stories from past to present. Here you stroll through the exhibitions, some with panoramic windows that give a fantastic view of the harbour entrance and the archipelago. It provides an immediate feeling of proximity to the sea. When you reach the end of the Galjonshallen, you will discover excellent acoustics, so good that there are occasional concerts and live performances here. The room gives almost a meditative tranquillity, so take a chance to settle down for a while. Just breathe, reflect and enjoy!

At the Marine Museum, you can board a real submarine - HMS Neptune. It is a high-tech submarine from the Cold War weighing 810 tonnes. It is so modern that it could still be in operation. Although HMS Neptune is the main attraction, there is also the old submarine Hajen in the Ubåtshallen, a story of Swedish submarine history from 1904.

Did you know that HMS Hajen is Sweden's first submarine? It had 3 torpedoes on board and could dive down to 30 meters. The driving electric motor was charged by batteries from a photogenic engine. The shark was easy to control in the underwater position but significantly harder on the surface. After a few years, the scrolls forced a rebuild that made it easier to manage in surface position.

In the Galjonshallen at the Naval Museum, there is a unique collection of significant wooden figures representing terrifying animals. These were in the bow of the boats, already on ancient ships, to frighten dangerous sea creatures. The gallon figures would also give happiness on the journey and appease the gods. On the Viking ships, the dragon heads were used to frighten the enemy but also to keep evil spirits away. At the Naval Museum, you can see these figures, which are several meters high and several tons heavy.

The wreckage tunnel is an underwater tunnel down to the bottom of the Baltic Sea. From the tunnel's windows, you can see a real shipwreck. It is most likely the warship Prince Carl from 1684. The ship was involved in an expedition to Denmark in 1700 and during the battles at Möen and Fehmarn a few years later. The warship was built in Kalmar and was about 50 meters long and 12 meters wide. It was a liner that together formed lines and fired in the same direction, but which were divided into different ranks. Prince Carl was one of the first rank battleships. In 1714, the ship consisted of 86 cannons and contained over 500 boatmen and 100 soldiers. Think that parts from this ship you can see today, it's pretty cool!

Between the exhibitions, it can be helpful for the kids to do a while. In the Seamen's Workshop, you can knot and knot together with a marine theme. There are always staff who can help all child-minded children. The seaman's workshop is aimed at children between the ages of 6 and 12. If there is lots of running and playing in the body, there is Dunders deck. There the children can play Skipp Ahoj, try experiments, challenge each other in competitions, solve problems, test the balance and send radio messages.

When you are then hungry, there is the restaurant Skeppsgossen on the entrance level with a lunch buffet and homemade ice cream. If you want to bring your own food, you can eat in the dining room on floor 2.

If you want to sit down, enjoy the food and the view without having to think about your outer clothes, bags and accessories, there are lockers to borrow. Nice when you just want to hang out, be present, relax and not have to think about anything.

After dinner, you can look into the Marine Museum's shop, right next to the reception. Here you will find crafts and beautiful things that are reminiscent of Karlskrona's history. It will be pleasant memories to shop with homes, a useful utility or beautiful decor.

- near the Naval Museum