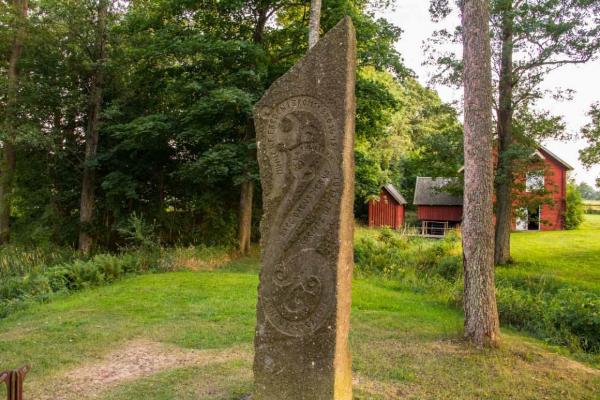 The peace stone in Bröms

The memorial stone stands on an islet in Brömsebäck and erected during the First World War in 1915 in memory of the peace in 1645.

Welcome to visit the Peace Stone in Bröms!
In the middle of Brömsebäcken, peace was concluded in Brömsebro between Denmark and Sweden on August 13, 1645, and this became the starting point for Sweden's great power. The result was that Sweden received Jämtland, Härjedalen, Gotland, Halland and Ösel from Denmark - and became a significantly much larger country. In addition, the Swedes gained freedom of duty in the Sound.

Already in 1050 the area was the place for settlements. Then the Swedish king Edmund met the old Danish king Sven Estridsson in the so-called Danaholm's meeting, here also the ravine between the two kingdoms has been set up and marked with 6 large stones. One of these is said to be a three meter high stone at Bröms, just north of the creek.

The memorial stone stands on an islet in Brömsebäck and erected during the First World War in 1915 in memory of the peace in 1645. On the stone we can read the names of the peacemakers: Axel Oxenstierna, Corfitz Ulfeldt and the peace mediator de la Thuillerie. Axel Oxenstierna got a huge fortune on peace when he got Södra Möre as his own county of Queen Kristina, which increased his annual income by about SEK 15 million. Ulfeldt later turned out to be a gamble that spoiled a fortune from the Danish Treasury.

Adjacent to the Peace Stone is a beautiful cycle and walking path.
Source: Torsås Municipality