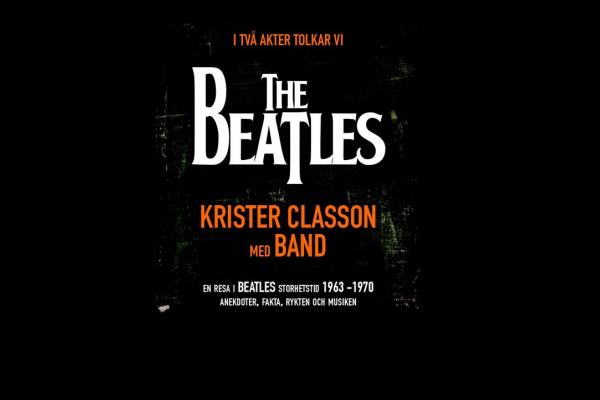 Krister Classon in a rendition of The Beatles

Tribute tour to The Beatles at Karlshamn city theatre.

Krister Classon ends his artist career with a tribute tour to his favorite band The Beatles. After 25 sold out concerts this autumn, he will come with his band to Karlshamn on Friday 12 September at 16.00. Krister Classon with band interprets The Beatles in two acts.

Together with four musicians, he makes a tribute where music is mixed with facts, anecdotes and rumors. This is a dream project for Krister and the last thing he does on official stages. He ends with the show he had wanted to start with 56 years ago. Jens Classon drums vocals, Benjamin Önnhed guitar vocals, Hans Schakonat guitar vocals, Johan Ljuslin keyboard and Krister Classon bass.

Krister's own words - 56 years of longing are over:
On October 30, 1963, I got to watch a TV show called Drop In. I turned 8 in December that year and this is one of the few memories I have from my childhood. We had no TV but grandpa and grandma had. There they are suddenly, in grandfather and grandmother's TV 4 long-haired boys in nice costumes and singing 4 songs I never heard and never came to forget. Since that day, I have longed to pay tribute to The Beatles, but many fun projects have come in between over the years. 5 years as a dance band musician, 20 years as a comedian in the duo Stefan & Krister and 10 years as a screenwriter and director. But now it's finally time! And of course it's a good year because it's exactly 50 years since The Beatles made their last gig.