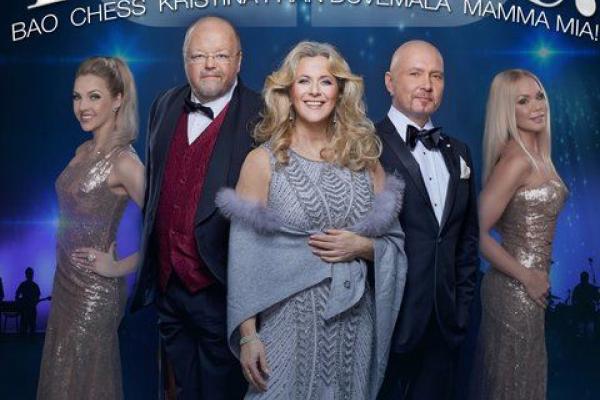 Concert: Thank you for the music - A tribute to Björn & Benny

The show will continue in the autumn of 2022. Gunilla Backman, Kalle Moraeus and Johan Boding are getting ready to meet the audience again with the show "Thank You For the Music".

It is a tribute to Björn & Benny and their unique song treasure from stars that are close to them. The audience is offered the best from i.a. BAO, Chess, Kristina from Duvemåla, Mamma Mia. It will be difficult to sit still ...

With them, Backman, Moraeus and Boding have a seven-man band led by Johan Granström. The artists Jenny Redenkvist and Karin Funk also join in to pay tribute to our Swedish music icons.

Kalle Moraeus - This award-winning fiddler needs no further presentation. Kalle is one of our most beloved artists, a close friend of Benny Andersson and also a member of Benny Anderson's Orchestra (BAO). Kalle was for many years celebrated host of the SVT hits "Så ska det låta" and "Moraeus and more" - Kalle's own TV program series that was broadcast in the years 2011-2017. Most recently in 2018, we saw Kalle fight successfully in TV4's "Biggest looser VIP".

Gunilla Backman - One of our greatest musical artists! Gunilla has played many of the heavy roles in a number of major musicals, including Les Misérables, West Side Story, Miss Saigon, Jesus Christ Superstar to name a few. In 2005, she got the lead role as Donna in the Swedish musical version of Mamma Mia (which Gunilla played with in 2005–2007 at Cirkus in Stockholm). For the contribution to Mamma Mia, she was awarded the Gold Mask in 2006.

Johan Boding - He is recognized as the front man for countless successes with tribute concerts to Queen. One who is impressed by Johan's song is Queen guitarist and legend Brian May. Johan sings everything from jazz and songs to rock and he has, among other things. participated in SVT's "Så ska det låta" and "Doobidoo". He has toured with "Sun, Wind and Water", a tribute concert to Ted Gärdestad's song treasure. He has also had roles in several musicals and was awarded the Golden Mask in 1997 for his participation in Miss Saigon.

Duration 2.5h incl. break of 20 min
Tickets are sold online via tickster, you can find the link down below.