- Swedish spices as in the Middle Ages 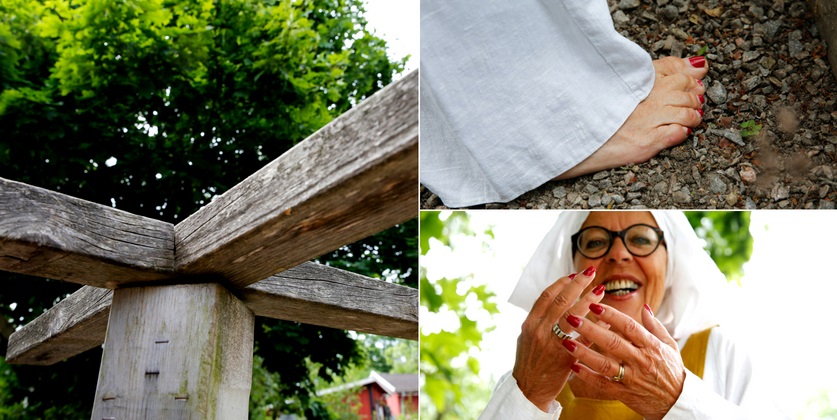 The reversal was initially used to keep the livestock out of the houses. Besides, it has the form of a cross which was important during the Middle Ages. As a married woman, you could not show arms or hair. Feet, on the other hand, went excellent.

At Sturkö, just a few kilometres from Möcklösundsbron in the middle of Blekinge archipelago (Karlskrona), Christel Hammar Malmgren runs Bredavik herb garden, an exciting retreat where spices, flavours and medieval faith are in focus. Do not miss a guided tour in the herb garden. 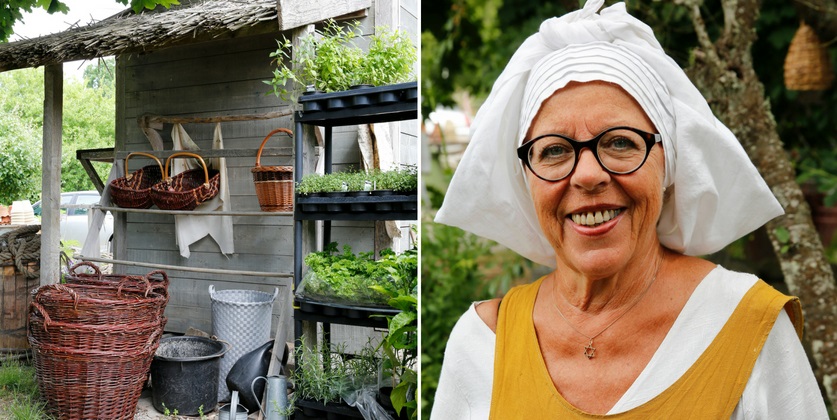 Stundtals - during the exhibition in the herb garden - Christel switches to old medieval clothes.

From the turnstile - a visiting carousel that kept the livestock out of the cultures - it's only twenty meters to the herb garden where dozens of herbs are divided into squares, just like in the Middle Ages. Here you can learn more about suitable herbs for food, wound care, for love, for mood, soul and internal diseases. In total there are indeed one hundred different kinds of herbs.

She is dressed in old linen clothes, a practical way to counter heat, but also an essential parameter in a spectacle that captivates both children and adults. The stories of the Middle Ages are just so fascinating that the clothes in some way give hero's legitimacy. Or what is it said that Libbsticka could cure unhappy love that Lungrot (thanks to the shape of the leaves like two lungs) could cure lung diseases and that Vallört could have broken bones to heal? 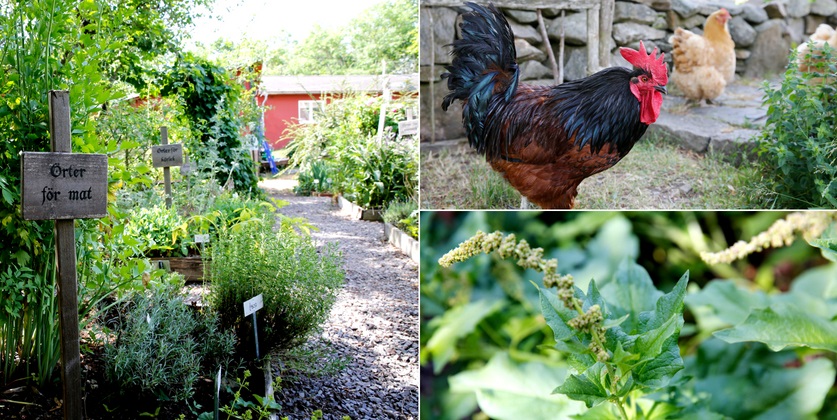 The herbage farm is divided into sections with herbs for food, wound care, love, mood and soul and for internal diseases.

For almost forty years Christel has had her own herb garden. The next, Bredavik herb garden is already a good bit over twenty years old, drawn and delved as a classic herb garden in a medieval monastery. By studying paintings from the early 1000s to the late 1400s, Christel has been able to build a periodical herb garden that not only looks like a monastery garden. With strict squares and paths in between - but also has the medieval herb garden's wild edge, a soul's herb garden where the wildlife symbolises relaxation and peace of mind, just as Holy Birgitta once has expressed. Also, there is a small bench beside a pond where the power of the garden becomes a feeling to remember. 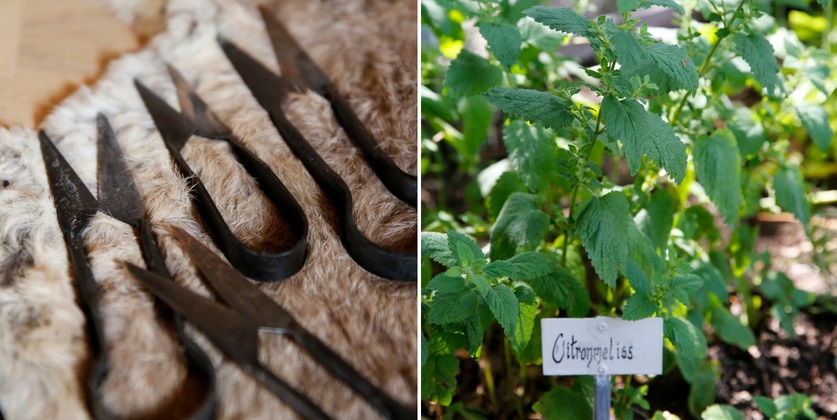 Lemon balm to use as a spice in food.

Bredavik herb garden is built as a monastery garden in the 1300s, except for the herb garden, it can also experience a medieval setting with houses like the 1300s.

- We have built a medieval city in the garden with a weekend house (a house that can be described as hospital, inadequate housing and retirement homes), barber and apothecharium (a former pharmacy), says Christel Hammar Malmgren, showing a fraction of the enormous range of spices, herbs and teas available for sale at the store.

Apart from teaching the visitor how medieval medicine was built, Christel is burning to spread herring skills and educate people to rediscover the power of plants, as health food preparation, tea and spices. Nowadays, Bredavik Örtagård is a large spice producer, both of herbs normally growing in Sweden and of spices imported into Blekinge and mixed to amazing taste mixtures in the sea belt.

"I am cautious in the selection and work only with the world's best seasoning producers. It guarantees high-quality spice blends that satisfy the tastes of the food, "says Christel.

Apart from prepackaged spices in both glass and cellophane, Christel also sells spices in bulk. All for the visitor to buy as many spices as needed.
The fragrance is fabulous, slightly seductive and it's absolutely impossible to smell without buying. 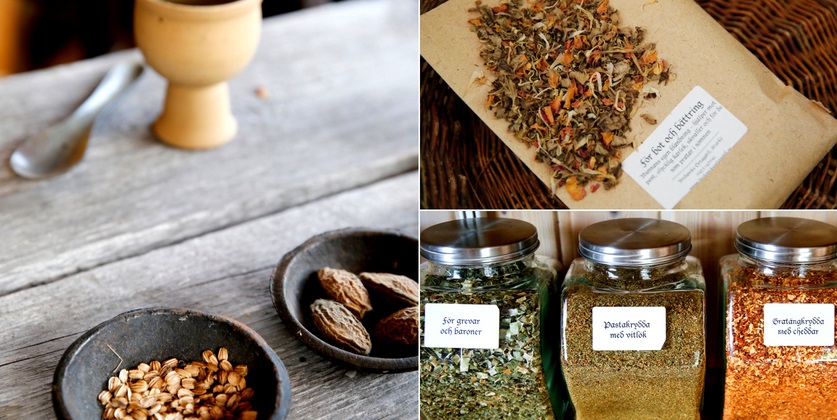 Drink tea for cure and improvement. The nuns own blen that helps against pestilence.

Haha, no, that's enough, says Christel and laughs. My spice mixes simply get the food suck to turn on, and it's suddenly easy to see the evening's dinner stand on the table.

With children undoubtedly Bredavik's herb garden is an experience in class with any museum. Also, in a scenic setting on the first part of Sturkö in the Blekinge archipelago. By car, it is just over 20 minutes from central Karlskrona to Bredavik's herb garden, and by public transport, you can count 1.5 hours by bus and 40 minutes by boat (from the trade port to Bredavik bridge) including connecting stroll.

Find here: Follow the E22 north in the direction of Kalmar. Just after Öljersjö you turn right into the roundabout (Signpost Sturkö / Hasslö) and follow Sturkövägen in only under 12 km. Bredavik Örtagård is located on the left side of the road. Signposted. www.bredaviksortagard.se Tel. 0704-44 20 41.

Five favourites: It is difficult to designate five preferences from Bredaiks's vast range. But if I have to be, Buller and Bang (a sweet chilli pie), Dukes and Dreams (Oriental Spice), Munkens Lammkrydda (a little hotter lamb), Summer and sun (herb spice very suitable for potato dishes) and Wilhelm's herb sprouts garlic) five favourites. The herb gardens BBQ seasoning (in Bredavik's way) is also a great seller. All sold in bulk. 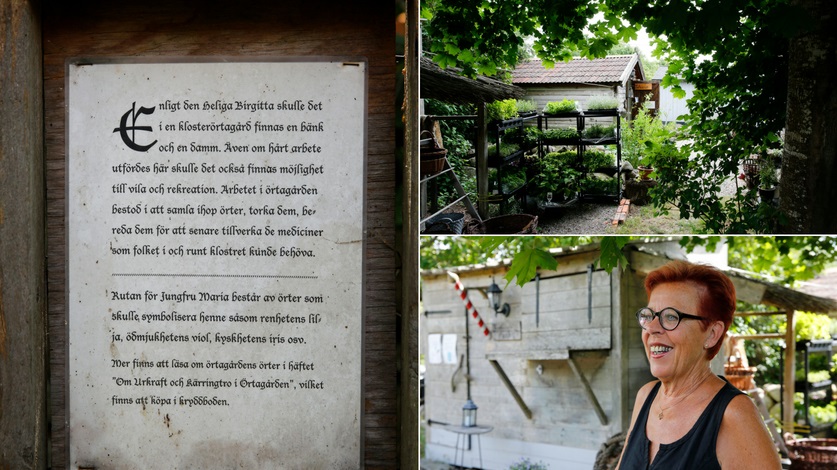 Healthcare as in the Middle Ages: The four body fluids - the red blood, the white mucus, the yellow bile and the black bile - needed to be continuously balanced so that people would not get sick. Harmony was caused by swallowing, clutching and blood clotting.
The diagnosis was performed, among other things, using urine retrieval and pulse retention. Rocket Science in other words.

Five herbs and how they were used in the Middle Ages (think we may have a different view today).
• Basil - was considered to cope with paralysis and mixed with wine to cure fever. Was deemed to be good for digestion, for severe ulcer and used to solve battles and settle down. Women used basilica to increase sex drive.
• Dragon - was considered good if you were bitten or stuck by poisonous animals and dogs.
• Daggkåpa - a classic herb that was deemed to be useful when the woman was no longer fruitful, dedicated to Virgin Mary. Medieval alchemists felt that the water drop - often found in the midst of the diapers, especially in the morning light - had magical powers and that the fall could give youth forever.
• Gurkört - could awaken wretched, sad and melancholic people to joy and cheerful anger. Also, the herb was considered to be cardiovascular and resuscitating, but also blood-purifying and fever-reducing.
• Isop Hyssopus officinalis - Used for the purification of the lungs and at the stenosis, cough and liver pain. It was also common as a cover over wounds and bruises.

Source: Christel Hammar Malmgren and the scripture "Out of power and love in the herb garden".

Niklas lives in Blekinge. He is a lecture, writer, photographer and has written the books; Live like a farmer, The farmer´s pantry, The crisis manual and Travel with children.

Sturkö is a beautiful farming area, although the islands consist mainly of bare rocks. But maybe that's what makes the island so excited to experience. Here are some tips to see and do when you are here: