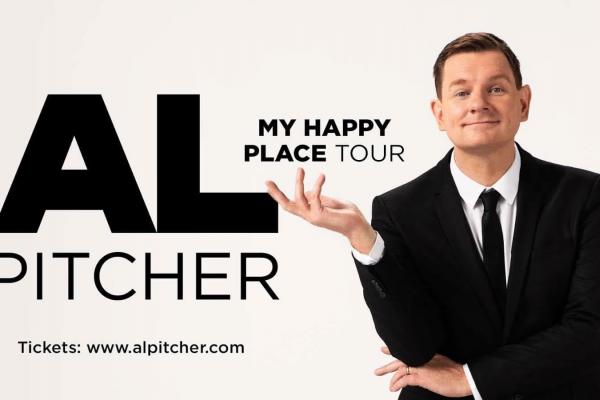 When it became official that the Swedish tour "My Happy Place" would be canceled, there was quickly a great demand for tickets and more tour cities.

The long-awaited tour would premiere in 2020 but due to the pandemic, it had to be moved forward. It is now clear that "My Happy Place" will have a premiere with double performances in Linköping on Monday, Thursday, April 14, 2022. The tour has also met the demand and 12 new cities have been added.

Al Pitcher was born in England, grew up in New Zealand and started his stand-up career in London -99., He moved to Sweden in 2010 and quickly became a big name on the Swedish humor scene. As early as 2011, he won "Best Male Comedian" at the Swedish Humor Gala. In 2012, he toured with the sold-out show "Fika Tour" which was followed by the tour hits "Påtår" 2013 and "Näämen it's Al Pitcher Tour" 2014-2015. SVT´'s special performance "Fyfan Sweden" was shown in 2016 and was seen by over 1 million viewers. The following year, the tour "Sweden Syndrome" premiered with sold-out performances throughout the country and also in New York, Copenhagen and Amsterdam. "Sverige Syndrome" was shown in 2019 on SVT and was released in 2021 on Netflix where you can also watch "Fyfan Sverige".

"My Happy Place" is about Al´'s signature humor, Sweden, which has become Al´'s home and also his Happy Place. Through the Swedes and the Swedish traditions, which he still struggles to understand, he tries to find his place and, like the rest of us, he seeks happiness. Does it exist? In such cases, where? Al Pitcher welcomes the audience to his world and Happy Place.

For more information: alpitcher.com
Tickets are sold online at Ticketmaster.se, the link can be found below.